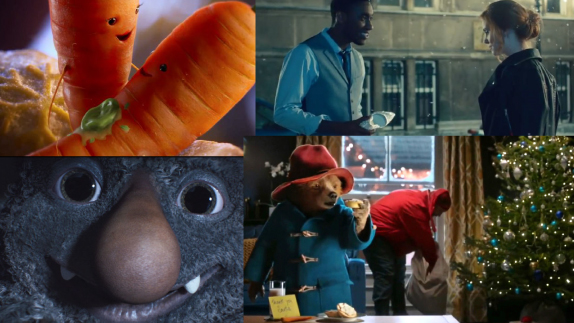 When the Christmas advertisements start to arrive, we know that the festive season is upon us.

Each major retailer works tirelessly to create to best campaigns that stand out against the crowd. With many more advertisements to come this festive season, here is what has already launched this year…

The two-minute ad focuses on seven-year-old Joe who is kept awake by a snoring Moz who is sleeping underneath his bed.

The story tells the tale of how Joe suffers a series of sleepless nights until finally becoming friends with Moz the Monster.

The ad tells the story of a young woman who loses her shoe on a crowded train and the stranger that finds it. From there the tale unfolds, following the quest to reunite the lost shoe with the young woman.

The spirited little root vegetable is once again the star of Aldi’s 2017 Christmas advertisement. According to Aldi, picking up from where last year’s campaign ended, Aldi’s new advertisement opens with ‘Kevin the Carrot’ discovered as a snowman’s nose before being ruffled by grumble of the approaching train.

Jumping aboard, “Kevin discovers this isn’t just any train, but a luxurious sleeper complete with a dining car brimming with Aldi’s amazing Christmas feast”.

‘Kevin the Carrot’ soft toys will be available this Christmas season in Aldi stores nationwide from 23 November at a price of €3.99.

Paddington Bear is the centre of attention for this year’s M&S Christmas advertisement. The ad sees Paddington discover a burglar on the roof who he mistakes for Santa Claus.