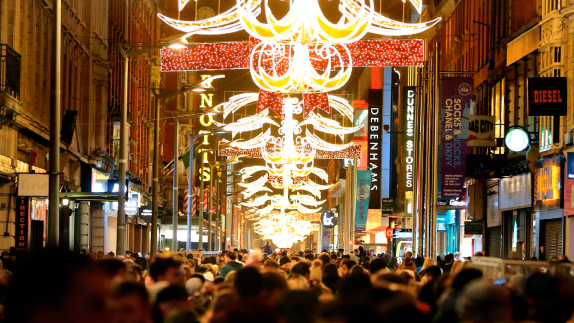 It is the biggest shopping day of the year, overtaking Christmas, and with Black Friday set to get consumers buying with gusto, retailers are already offering massive discounts.

The Gardaí have issued Do’s and Don’ts for internet shoppers ahead of Cyber Monday and Black Friday as part of a new Safe Online Shopping campaign.

Almost Two Thirds Of Adults Purchase Yogurts Once A Week

Almost two thirds (63%) of adults purchase yogurts at least once per week, with purchase levels peaking amongst those aged over 65-years old (70%) and those aged …

Ikea Now Has 8,300 products for sale online – but not the one I want

Retailer’s €7.50 country-wide fee for new shopping will delight, but product choice – while extensive – may disappoint

73% of Irish Consumers Have Bought Online in the Past Year

Mastercard and Dublin City Council have some exciting plans to make the city smarter.

The co-founders of FoodCloud, Iseult Ward and Aoibheann O’Brien have been named joint Businesswomen of the Year by Image magazine.

Tesco Ireland has announced the launch of a new range of fruit and vegetables, Perfectly Imperfect, together with supplier Country Crest.

Price Of Petrol At Highest Level Since March 2017

The price of petrol has reached the highest level since March, according to the latest fuel prices survey from AA Ireland.

Aldi has officially opened its latest store, in Trim, Co. Meath. 20 new jobs have been created at the new store, which features Aldi’s ambitious new “Future Store” layout and image.

The millions continued to roll in last year for the company behind the country’s best-known nightclub, Copper Face Jacks, as accumulated profits at the firm soared to €72m.

Aldi Increases Its FoodCloud Donations By 60%

Aldi Ireland has expanded its partnership with FoodCloud and has increased its meal donations by 60%.