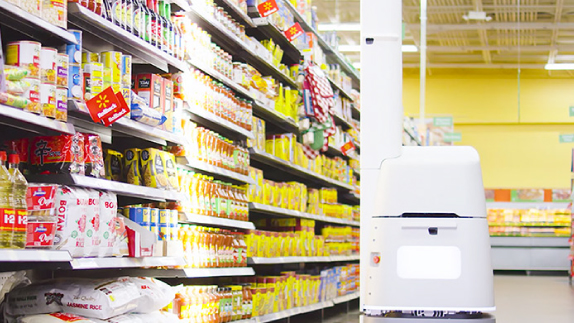 Robots have become a common sight in warehouses (Amazon are estimated to use more than 45,000) but now they’re also being introduced into stores. Major American retailer Walmart, has announced that it is deploying shelf-scanning robots in 50 locations around the US, using machines to check inventory, prices, and misplaced items. The retail giant explained that the robots’ won’t lead to job losses, and the company wants to save employees from carrying out tasks that are “repeatable, predictable and manual.”

California-based Bossa Nova Robotics manufacture the robots, which has resulted in the machine being two-feet tall with an extendable tower containing sensors for scanning shelves. They sit in recharging stations in the store until an employee gives them a ‘mission’ – for example, checking a particular aisle to see what needs re-stocking. Walmart said that the robots will not only save workers’ time, but also allow data collection to improve efficiency nationwide.

John Crecelius, Walmart’s vice president of central operations stated, “If you think about trying to go through a facility with all these different items and figure out if your prices are accurate, it can be very time-consuming.”

“From our perspective, when you’re doing things like this you’re trying to improve your service to your customers and trying to make things simpler and easier for your associates at the same time.”

The robots’ usefulness is simple enough to demonstrate, but it’s harder to believe Walmart’s claim that their deployment won’t lead to job losses. Only the future will tell!