We are absolutely delighted to announce that PRL has won Platinum at the Deloitte Best Managed Companies Awards, which took place in the National Convention Centre on March 1st.  This is PRL’s seventh consecutive year being named in this prestigious programme and sees us attaining Platinum standard for the first time.

The Deloitte Best Managed Companies programme promotes and recognises excellence in Irish/Northern Irish owned and managed companies. It is the only awards scheme on the island of Ireland that considers a business’ performance from every perspective. Applicants to the programme must participate in a rigorous and independent process that evaluates the calibre of their management abilities and practices.  This year’s judging panel members were Frank Ryan, Chair of the Judging Panel; Brendan Jennings, CEO, Deloitte Ireland; Tom Hayes, Chief Executive, Bank of Ireland Corporate Banking; Siobhan McAleer, Commercial Director at the IMI; Rose Hynes, Chairman of the Shannon Group Board and Origin Enterprises; and Feargal Mooney, former Chief Executive Officer of HostelWorld.

We are incredibly proud of this huge achievement, which would not have been possible without the efforts and contribution of each and every member of the PRL team.  Thank you to all of our staff, clients and partners, and here’s to a Platinum 2019! 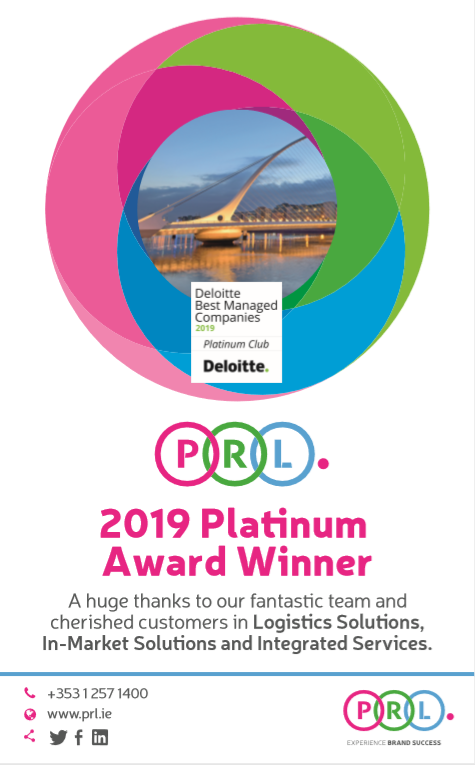