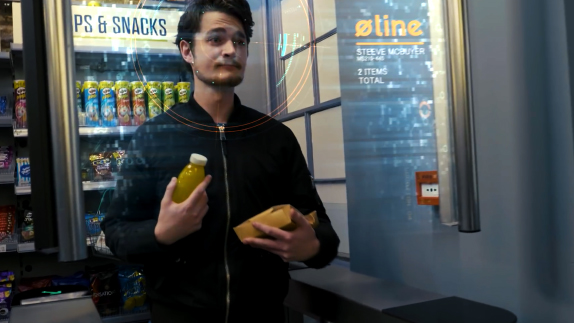 The world is about to witness the first ever cashier-less shop which is set to open in Cork early next year, using new technology that is set to revolutionise world retail, writes Alan Healy of Cork’s Evening Echo.

Blackpool company Everseen are the ones behind the development of the new store which is situated on French Church Street in Cork’s City Centre. Everseen are currently testing their system that will allow consumers walk into the shop, pick up any items and walk out the door with all items registered and paid for from their account without having to be scanned by a staff member or themselves.

The new system that will enable checkout-free shopping is called Øline (pronounced zero line). The system uses cameras and computer intelligence to keep tabs of what customer take of the shelf. The system can also tell if they return an item to the shelf.

Once a customer is finished shopping, they review their purchased items on the Øline app, approve the payment and leave the store.

The testing of the system is ongoing but Everseen expects to open three shops to the general public in the first quarter of 2018, including the one on Cork’s French Church Street. Retail giant Amazon is also in the process of planning cashier-less stores and has developed a concept store at their headquarters in the US, but it is not yet available to the general public.

The CEO of Everseen, Alan O’Herlihy, explained that the technology is about a lot more than removing registers and lines.

Mr. O’Herlihy said, “Øline gives offline retailers intelligence about their customers. It allows them to respond to consumer behaviour and emotions, not just purchasing patterns.”

As a UCC graduate, O’Herlihy grew up in a family of retailers and had dedicated his career to eliminating the complexities of the retail experience.

The use of self-checkouts are now commonplace at most major supermarkets with customers scanning their own items. However, this technology takes it a step further removing checkouts completely. Everseen said they expect to be able to offer its technology to much larger “football stadium-sized stores” within two years.